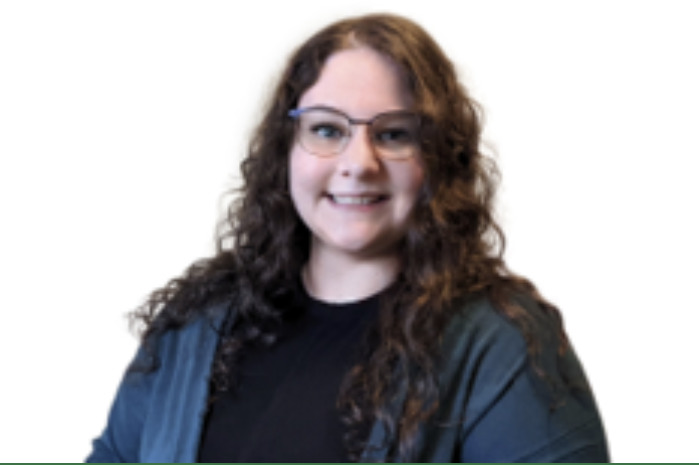 Q: Tell us about your journey to technology how did you start and what led you down your current path?

“First, in high school, I started to become interested in things like Photoshop, and things like game design, I took a game design class, and I learned a little bit of C++. I was interested in it, but I just did not know what realm I wanted to go into. I knew that I wanted to create things on a computer. I wanted to work with computers and be able to digitally create things. I just did not know exactly where I was going with it yet. I did a lot of CAD and 3D printing in my associate degree work, which I found to be really fun. But once I got into the mechanical engineering program, and looked at my job prospects, I thought, ‘is this actually what I want to do?’

Before the Interapt program, I was studying at Marshall in CIT, with an emphasis on mobile and web development. Originally, I was studying engineering and I have an associate degree. I took a programming class, and I just got really into it.  I think it was Python for that program. And I just said, ‘Well, this is actually really fun. This is something that I did not really consider before, but I think that maybe this is what I want to do.’ And I’ve been going on that journey ever since.”

Q: How did you find out about Interapt?

“When COVID hit things were a little bit rough for my family financially. I realized how fragile that situation was, and I said, ‘Well, I do not have enough money or time to finish my college degree right now. So, I am going to put my nose to the grindstone and just do this on my own.’ When I heard about the program with Interapt, I thought it was just the perfect opportunity. It was exactly what I was looking for.”

Q: You mentioned gaming being an area that originally sparked your interest in technology, are you a gamer?

“Yeah, I would say that I am a gamer. And that is definitely one of the biggest things that drew me into tech in the first place was being able to do game design. In fact, my projects for the program included making game applications. It is still something I am interested in; I just want to make sure that I am a little bit broader in my tech knowledge. I would like to be able to be multifaceted and able to do lots of different things.”

Q: What are you most proud of?

“My capstone was definitely a big one. I feel like by default, I have to go with that. But one that may be a little bit unconventional is I was able to do a lot of after-class group meetups with people to continue to study and work on things. I think one of the biggest things I got out of the program was the network of people, and we still talk to each other and meet up to work on things, regardless of where we are in our careers. I think that’s one of the best things. But, yes, getting my capstone done was a huge, huge accomplishment that I felt really proud that I was able to push through and put something out there. It felt really good.”

Q: What area of tech do you really shine in?

“I would say I’m better at the backend side of things, that is one of the things that I have been really good at. I also think that maybe I’m pretty good at thinking sort of more out of the box, like outside-of-the-box solutions and things that people may not initially consider.”

Q: What area do you prefer to work in tech?

“I definitely prefer the backend side of things. I feel like I just pick up on it a little bit faster. But like I said, I think one of the biggest things that I really enjoy about it is being able to create something, solve complex problems and just have that rush of like, whenever you get stuck on something, and then you finally work really hard, and you finally push through. I think that is a really addicting kind of feeling to chase.”

Q: What motivates you?

Q: Did you experience any setbacks or challenges?

“COVID and how much that disrupted everything, in general, really was a huge setback, because like I said, I was in a program at college, just expecting to, you know, keep going and finish in a couple years.  The biggest setback was just not being able to finish my degree, sort of the path that I had originally seen for myself. I feel actually now that it worked out for the better. I do feel happy that I found a non-traditional path. I haven’t given up on finishing my degree. I’ve been looking into potentially finishing my degree online and getting that later. But for now, I’m working on gaining actual work experience that can actually help me with a degree. So, in hindsight, after everything, I feel like this was the better path to go. And I’m really glad that I got pushed to do this.”

“Aside from being comfortable with failure, it is easy to get caught up with perfection, but sometimes perfection is the enemy of good as they say. So, another thing is to not always strive to be perfect but to strive to always keep doing things, to keep growing, and keep growing and working towards your goals.”

Q: During the program, was there a time that you were exhausted in a good way?

Q: Was there one time during the program when you could not wait to get home to tell someone about what happened?

“I think one of the biggest ones was, right in the middle of the program, we actually had one-on-ones with the professors who spoke with us about, you know, how we were doing, what our progress was, and all of that stuff. And I was, I tend to be pretty hard on myself. So, I was really pleasantly surprised with what they had to say about how I was doing, and they said, you know, that I was exceeding expectations, just doing really well on the program. I guess it was one of the first moments that I really felt like, oh, I’m actually doing this, and this is proof that I’m actually doing this and succeeding because sometimes it feels like it’s so much and so much all at once that it’s like, how am I even doing right now. So having that feedback was really good. And I was really excited to be able to tell everybody, you know, what they had said about my progress.”

Q: What are you most excited about regarding your future career in technology?

“I’m most excited to get into the workforce and really learn what it’s like to work on enterprise level applications and to develop those and what it is like to work with a team all the time to do that stuff, because we did group work, you know, with two people but it doesn’t really simulate the experience of actually working on a team. So, I’m really excited to just hit the ground running.”

“…keep trying to not be dissuaded by failure. I know, it’s hard to actually feel this all the time. But you have to learn to be excited by failure because when you fail, you actually learn more than if you do it perfectly the first time.”

Q: What are you doing in the meantime until you start work?

“I have been working through a Udemy course on testing, TDD, and Mockito framework because I know those are things that CVS in particular is really big on. Outside of that,  I’m planning more group meetups for me and other cohort members to work together on some projects outside of what we’ve been doing. I’m really excited to keep working with people, keep learning, and just keep growing my skill set and my network.”

Q: We are celebrating Women’s History Month and celebrating how women have overcome various obstacles and acknowledging their achievements, what advice would you give to young women or girls who might want to pursue a career in technology?

“I felt really held back by just feeling like, Oh, I’m not good enough. Or, if I don’t pick up on this very fast, it is because I am bad at it or something. I struggled a lot with those kinds of self-assurance issues. I think that’s really common for women, especially younger women and girls. I would say, just keep trying to not be dissuaded by failure. I know, it’s hard to actually feel this all the time. But you have to learn to be excited by failure because when you fail, you actually learn more than if you do it perfectly the first time. So, you have to really be comfortable with failure, you have to keep trying to keep pushing. But, I would say that you can do this, don’t let yourself or anyone else convince you that you can’t do it because you’re a girl or because of this or because of that.  Just train yourself to have the perseverance and the bravery to keep trying.”

…don’t let yourself or anyone else convince you that you can’t do it because you’re a girl or because of this or because of that. Just train yourself to have the perseverance and the bravery to keep trying.”

Q: Any final words of advice to others?

“Aside from being comfortable with failure, it is easy to get caught up with perfection, but sometimes perfection is the enemy of good as they say. So, another thing is to not always strive to be perfect but to strive to always keep doing things, to keep growing, and keep growing and working towards your goals.”

If you’re interested in learning more about our program or working with Interapt for your next project and hiring great talent like Mariah, you can contact us through our website or reach out via email (info@interapt.com) or phone (502-251-1511).